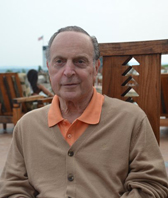 In September 2013, Carol C. Massaro established the Joseph A. Massaro Alzheimer’s Research Fund as a way for her family to honor her husband Joe, who had Alzheimer’s Disease. After fighting the disease for several years, Joe died on Dec. 30, 2015, at the age of 79. The goal of the fund is to find answers to the myriad of questions that remain about the disease.

Alzheimer’s is the most common form of dementia. The disease is primarily -- though not exclusively -- developed among individuals who are 65 and older. Over time, dementia symptoms gradually worsen to the point at which individuals become unable to hold a conversation or respond to their environment. Alzheimer’s is the sixth leading cause of death in the United States and there is currently no cure.

Carol experienced the devastating toll that Alzheimer’s can take on everyone that is touched by the disease. She stated that “with Alzheimer’s there is no known cause and no cure. You have to wait until the disease runs its course, destroying the brain of the person who has it.”

In her case, that person was her husband Joe, who was diagnosed with Alzheimer’s at the age of 72 and experienced a very rapid decline in health. Joe was a man who cared deeply about many things. In 1967, Joe founded Massaro Corporation and prospered, but never forgot his roots; according to Carol he had friends from all walks of life and always put his family first.

With the fund, she assisted research efforts devoted to finding a cure or preventative measure to the disease. Her goal was to raise enough money to fund research efforts in Pittsburgh so she can give back to the community.  “Pittsburgh has been very good to the Massaro family,” stated Carol. “We are not people of great wealth, but have always given whatever we could to organizations that we felt were deserving.”

On Dec. 27, 2018, Carol Massaro, age 79, died peacefully at her home after a two-year battle with idiopathic pulmonary fibrosis.

The Massaro Family Fund for Alzheimer's Research was created by Joe and Carol's children to honor the legacy of their parents and continue to fund research to prevent or find a cure for Alzheimer's Disease.