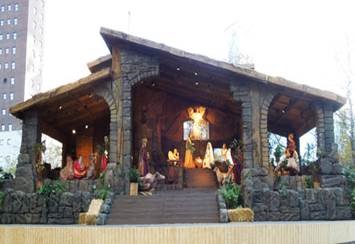 How the Crèche came to Pittsburgh is an example of how a diverse community joined together to accomplish a goal. In 1996, the Christian Leaders Fellowship displayed a Nativity scene near Gateway Center on city property. In 1998, the City of Pittsburgh decided such displays could no longer be erected on government property. Around this same time, Louis D. Astorino, a pre-eminent architect and member of the Christmas Festival Committee had visited the larger-than-life-sized Crèche at St. Peter’s Square in Rome’s Vatican City in 1993 and wanted to do something special for Pittsburgh’s Christmas Festival for the millennium.

In 1997, the Festival Committee and the Christian Leaders Fellowship approved Astorino’s proposal to duplicate the Crèche in St. Peter’s Square at a new downtown Pittsburgh location where even more people could linger to appreciate it. Then, Catholic Diocesan Bishop Donald Wuerl contacted USX Chairman Thomas Usher, who arranged for the Crèche to be displayed on private property on the plaza outside of what is now the U.S. Steel Tower. Workers at the Civic Light Opera’s Construction Center built the stable and, in Rome, Umberto Mezzana who designed the original stable worked with Petro Simonelli who crafted the first nativity scene figures.

Local foundations, businesses and unions contributed money, services and labor to the construction and assembly of the Crèche. The Sisters of the Holy Spirit now sew and maintain the clothes for all the life-sized figures. The new Crèche was dedicated on Dec. 6, 1999, and was displayed through Jan. 7, 2000. Every year since, volunteers and unions have donated their time and corporations have given services to help keep the Crèche a unique part of Pittsburgh’s holiday celebration. While much of the work on the Nativity is donated, not all the labor is free and other expenditures are necessary including truck rentals and police service. Because of winter weather conditions the nativity scene also suffers damage to the roof or to the plywood infrastructure and most years needs some repairs. It is for these additional labor and equipment costs and the as-needed restoration expenses that an endowment fund was created at The Pittsburgh Foundation.

Despite all of the donated services, approximately $70,000 is needed annually to maintain the Crèche and to house it when it is not on display. When a shortage of funds presented the possibility that the Crèche might be discontinued, Christians of all denominations not only responded to address the need, but worked with The Pittsburgh Foundation to create this fund to endow The Pittsburgh Crèche so that it could be appreciated and enjoyed by future generations of Pittsburghers.

The annual dedication of The Pittsburgh’s Crèche opens on Pittsburgh’s annual Light Up Night in November and remains open through Epiphany in early January. Each year an estimated 250,000 people stop to gaze at the life-like replicas and the manger scene that is the reason for the holiday celebration. The Crèche has become an attraction to downtown Pittsburgh allowing residents and out-of-towners to connect their beliefs with the joy of the season.