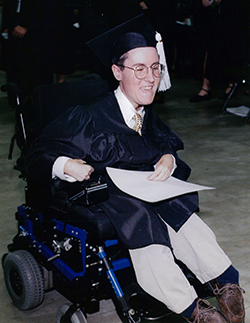 The M. Patrick Daniels Fund was established as a tribute to the unwavering spirit our son Patrick maintained through the challenges he met living with muscular dystrophy, and equally importantly, to help make a difference to the causes and organizations which were important to Patrick.

Diagnosed at an early age with muscular dystrophy, a degenerative disease which eventually affected all voluntary muscles, Patrick never let the disease define his life or limit his aspirations.

Even though Patrick was aware of both his physical limitations and shortened life expectancy, with determination and an uplifting spirit, he pursued his interests and passions. After graduating from Hampton High School, Patrick attended Wright State University in Dayton, Ohio graduating cum laude with a degree in political science. Patrick earned a law degree from the University of Pittsburgh School of Law in 2004. While in law school, Patrick interned with the Disabilities Law Project, the U. S. attorney’s office and the office of the Pennsylvania Supreme Court Chief Justice. Upon graduating law school, Patrick worked in the litigation department of the Buchanan Ingersoll law firm until his passing on February 26, 2009.

Patrick had a most positive outlook on life. Patrick was more concerned about other people, especially children, facing far more daunting challenges. According to his parents, “Patrick never complained and never deviated from what he wanted to do in his life. Patrick was our reality check every day. His challenges made ours pale in comparison.”

Children’s Hospital pulmonologist Dr. Jonathan Finder, who was Patrick’s primary physician for more than a decade, described Patrick as “a remarkable man, a heroic figure to me. It was a remarkable life because he did so much with so little. He served as an inspiration to go out and live life to its fullest. He didn’t accept his disabilities as necessarily limiting. He was very much a role model.”

It is difficult for parents to lose a child, especially an only child, creating a tremendous void and loss in their lives. Margaret and Michael decided that the most appropriate manner in which they could honor their son was to create the M. Patrick Daniels Fund at The Pittsburgh Foundation. This fund will grant annually, and forever so long as the needs exist through their legacy gift, those organizations and initiatives that Patrick felt were important and would have a positive impact on individuals, families and communities in general. 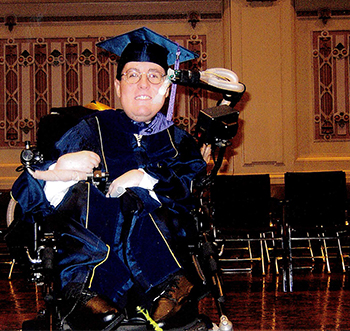 The beneficiaries and recipient of the directed gifts include the following:

Purpose: To be used for home adaptation/patient technology support, including computers, voice activated software, wheelchairs, wheelchair adaptation or other new and innovative technology to enhance the quality of life of individuals living with ALS.

Purpose: To provide the M. Patrick Daniels Scholarship annually for students who are registered with the office of disabilities and show financial need.  Students from Western Pennsylvania with muscular dystrophy are provided first opportunity to the scholarships.

Pittsburgh Cultural Trust/Pittsburgh Public Theater: Patrick felt that the arts and culture were an integral and important part of his life and felt that it was important to expand access. He loved the theater.

Purpose:  Distributions to be used to support or underwrite programs and events specifically for the purpose of expanding membership, season ticket sales or event ticket sales to people between the ages of 25 and 40 with the intended purpose of gaining support of the arts from this age group.

Muscular Dystrophy Association of Western Pennsylvania: Muscular dystrophy was the disease which presented Patrick with his life challenges.

Purpose: To be used for home adaptation/patient technology support, including computers, voice activated software, wheelchairs, wheelchair adaptations or other new and innovative technology to enhance the quality of life of individuals living with muscular dystrophy.

Thank you for supporting the M. Patrick Daniels Fund and its initiatives.