is senior vice president, Finance and Investment at The Pittsburgh Foundation.

Back nearly a decade ago, in those shock-filled months after the global financial calamity now known as the Great Recession, I emerged from my mostly behind-the-scenes role as The Pittsburgh Foundation’s financial caretaker to offer weekly updates to staff. The goal was to examine what lay behind the markets’ plunge and explain how government and private-sector responses were affecting our foundation’s assets.

In those email “fireside chats” beginning in September 2008, I was trying to counter panic and misinformation with facts. In the first few months of the recession, market participants really were coming unglued, and companies were disappearing.

While the markets’ roller coaster ride of the past several days does not begin to approach the shock and awe of the Great Recession, it has brought back ugly memories and caused concern. So, in response, I’m emerging again from the back office through this blog posting to offer some facts and perspective that I hope will be helpful to those who care deeply about the future financial health of our foundation.

First, and most important, the financial state of our foundation is strong. The assets of our charitable funds are invested in diversified portfolios, a mandate of our stewardship.  In our Legacy Fund we invest in a broad array of global equities and fixed income, including private assets and hedged strategies.  The underlying tenet of our investment philosophy – one in which all our fund managers share – is to search for the right valuation for the long term.

The obvious take-away in comparing the market gyrations through this week is that that we’ve experienced a corrective slap, one anticipated by many economists, while the 2008 recession was an economic smackdown that took the world by surprise.

What both events do share is a resurgence of volatility. The irony of the markets’ correction at the beginning of the week was that it was the result of overly enthusiastic speculators in volatility.

The relatively calm market behavior of the past several years meant that speculators could sell insurance against volatility’s return. They could collect a premium, invest it in the stock market and enjoy amazing returns.  My staff and I met in past months with investment managers who pitched exactly this tactic.  An investment that uses the Chicago Board Options Exchange Volatility Index, or VIX, a popular measure of the stock market's expected anxiety level, as a hedge against losses due to volatility might make sense for some investors if managed correctly. We viewed it as one among many schemes designed to leverage a return to bring a higher upside in response to a much more severe downside.  We passed on these offers, and have continued to do the relatively mundane job of rebalancing back into equity markets and out of cash. We watched markets continue to soar and volatility continue to sink, but we believed that dynamic would turn, eventually.

On Feb. 2, it did. The slump at the end of last week is being attributed largely to the increased probability that the Federal Reserve will raise interest rates to cool an economy that may be overheating. 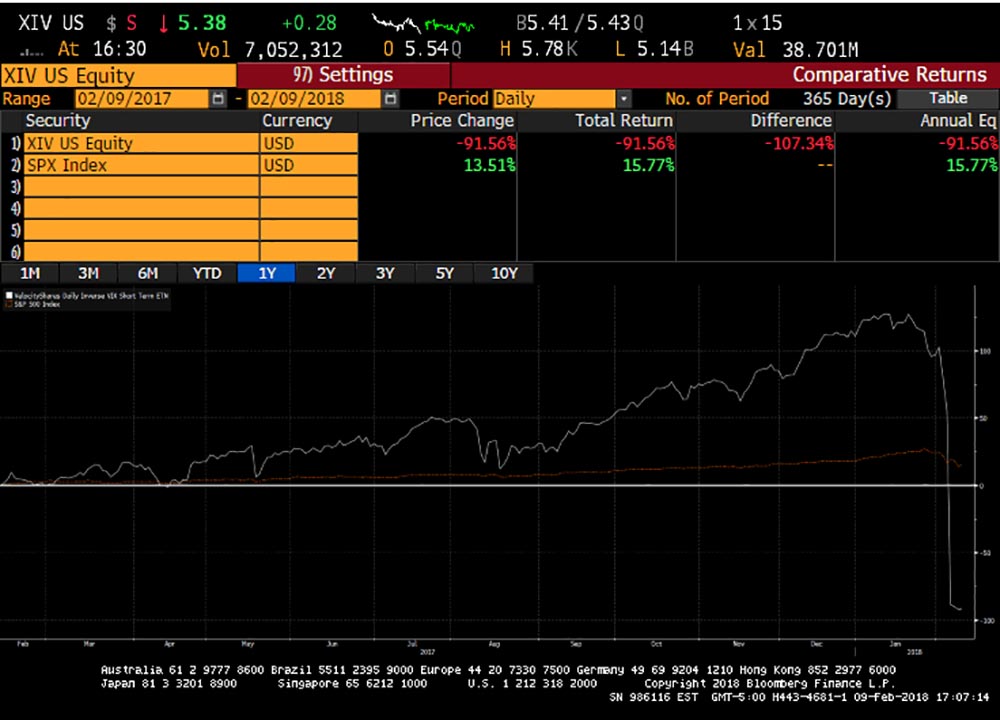 Speculative volatility strategies designed to profit from low volatility did spectacular through the beginning of this year, until they didn’t, when the market dropped and these strategies unwound losing nearly all of their value. This chart shows one such strategy relative to the S&P 500 over the past year. (Graphic credit: Bloomberg News)

Unfortunately, the slight pullback of about 2 percent was enough to tip the volatility markets into a steep reversal of trades that had made so much money. By Monday morning, volatility speculators were forced to unwind their trades after being hit by the multiplying effects of leverage. The forced selling was like blood in the water to high-frequency traders. That group further pushed markets down and pulled volatility upward.  By Monday night, several products geared to the VIX announced they were closing.

Meanwhile, here at the Foundation, we continue with the strategy of rebalancing back into equity markets and out of cash. Many companies are earning good money, certainly at much higher levels than in 2008. And we are fortunate to have donors continuing to join us in improving quality of life in the community.

Could the latest turmoil in the markets be an example of the Butterfly Effect, the concept that a massive storm might have its origins in the simple flapping of a butterfly’s wings thousands of miles away? It is possible. But at The Pittsburgh Foundation, we are not in the business of butterfly hunting. We look at systemic and macro risks as we always have, and we try to tilt our portfolio for the greatest advantage. But the best defense against downturns is a consistent, temperate strategy of diversification. We will never rely on a single asset class, or more generally, anything connected to the latest fad.