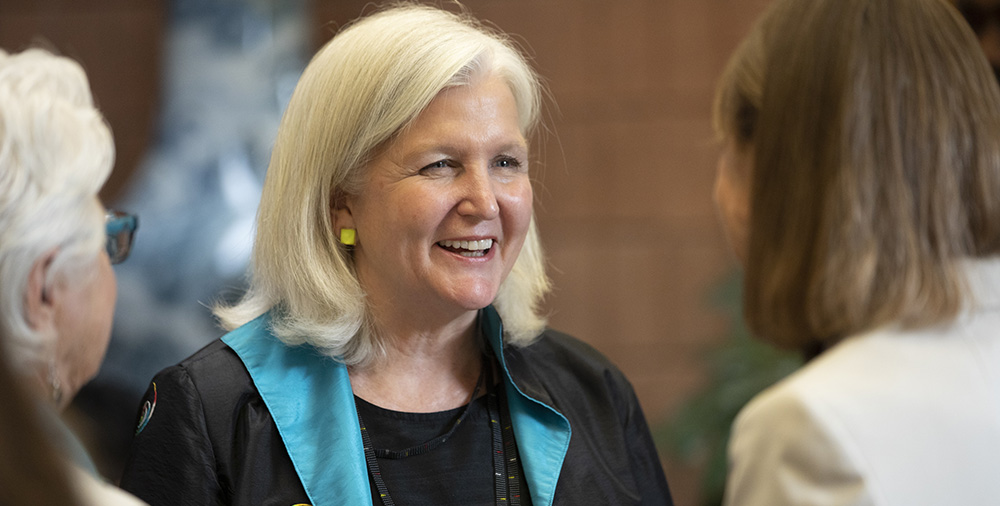 New President and CEO Lisa Schroeder speaks with guests in attendance at the May 22, 2019 reception at Manchester Craftsman's Guild.

On the evening of May 22, 2019, scores of foundation heads, elected officials and others across the community’s leadership landscape, joined The Pittsburgh Foundation’s Board and staff at the Manchester Craftsman's Guild to celebrate Maxwell King's five years as president and CEO. The crowd also welcome his successor, Lisa Schroeder, as the sixth president.

It is Schroeder’s second round as a Pittsburgh civic leader. From 2002 until 2015, she led Riverlife, a public-private partnership established in 1999 to guide and advocate for redevelopment of Pittsburgh’s riverfronts. She left to return to hometown Baltimore to become president and CEO of the Parks & People Foundation, which is dedicated to generating more resources and greater appreciation by residents for their city parks.

While King was unable to attend due to illness, his leadership was praised repeatedly in remarks offered at the event.

“Celebrating Max and Lisa tonight, I can only marvel at our good fortune to have this succession, each embodying all the highest leadership qualities and using them to their fullest,” Board Chair Dr. Edie Shapira told the crowd.

“Over the past five years, a period marked as one of most divisive in our country’s modern history, Max has led our foundation with extraordinary skill. His presidency caps a work record that covers nearly two decades of philanthropic and nonprofit leadership in the Pittsburgh region, across Pennsylvania and nationally.” Read Dr. Shapira's full remarks.

And in addressing Schroeder, Shapira noted that “while she and Max have different leadership styles, they share the same leadership values. Lisa believes, as does Max, and as do I, that the community foundation must distinguish itself as a strong civic leader. I am so pleased that Pittsburgh has re-gained Lisa’s talents and that our Foundation is the place where she will do great things." Read Dr. Shapira's introduction of Schroeder.

In her first address as the designated Foundation president, Schroeder told the crowd how shocked she was to see how far Pittsburgh has progressed just in the past four years. “I love to tell the Pittsburgh Story in cities that are struggling, to demonstrate that positive change does happen when people come together and make strategic investments in the places where they are most needed,” she said.

“As I throw myself into this amazing position, I will honor: 75 years of generosity; the experience of the accomplished staff; the tradition of the board's civic leadership; and the faith that so many of you have placed in me."

In his prepared remarks, delivered by Vice President of Communications Doug Root, King said the most valuable thing that could happen in the Pittsburgh region would be that the community-building work of the Foundation go forward as effectively as possible. The community foundation, he said, is in the best position to make progress closing “the shocking economic divide that bedevils our country and that has been building for five decades. It will take much more work by us and others to repair it,” he said. Read King's prepared remarks.

“I am grateful to everyone at the Foundation for providing me the opportunity to be a part of this mission. This has been the most meaningful work, and I thank Edie and the board for their support.” King cited Schroeder “for amazing experience, great capability and strong character to lead an exceptional staff in the right direction. She is a fine choice for the leadership role here, and I look forward to pestering the hell out of her with suggestions.”

Below are photos from the evening's festivities: