Philanthropy and The First Amendment 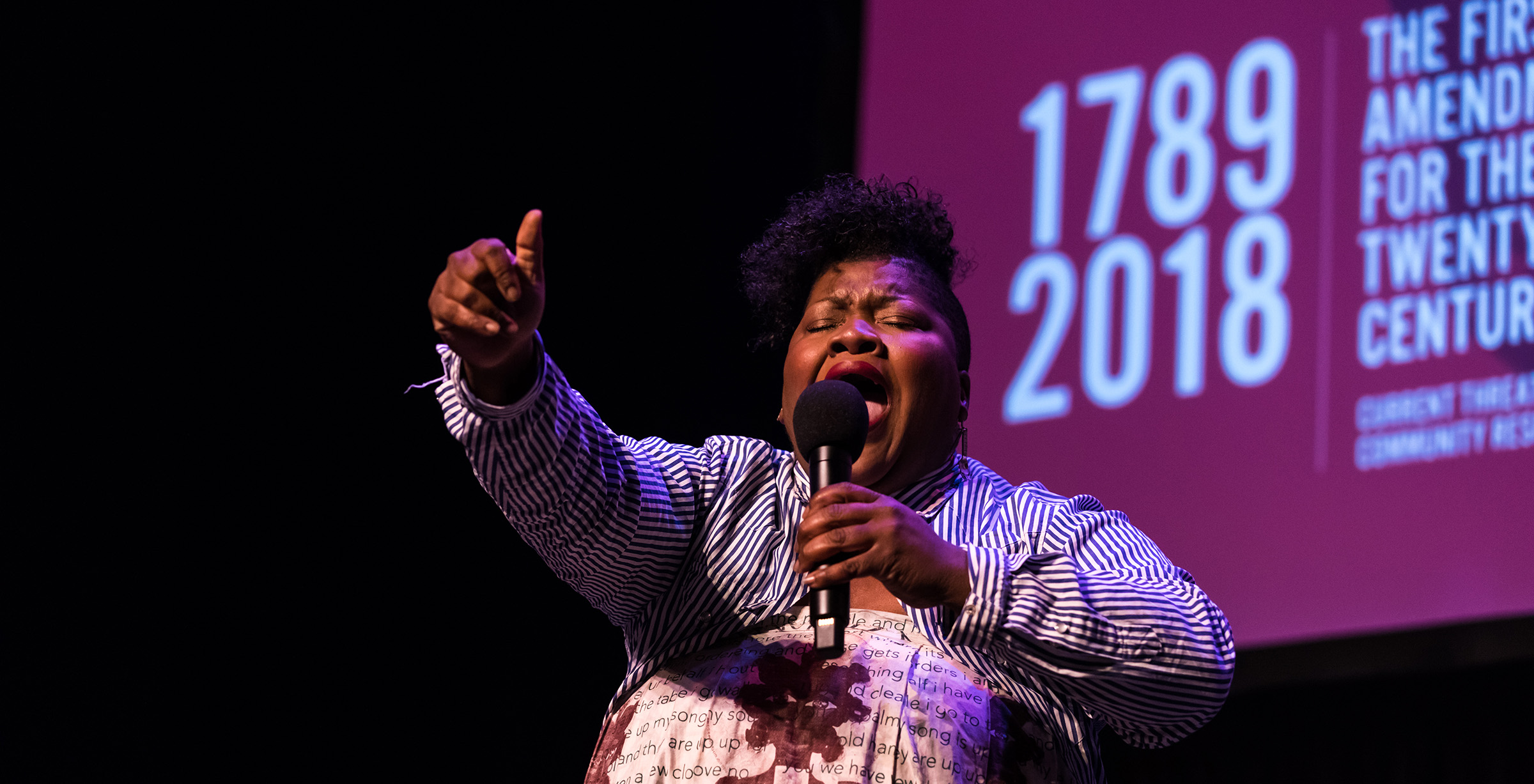 Visual and performance artist Vanessa German expresses anger, pain and social injustice as she acknowledged the tragic losses of Antwon Rose and rapper Jimmy Wopo at The First Amendment of the 21st Century conference.

A White House radio news correspondent who has covered the administrations of four presidents. A former Republican Congressman who represented Oklahoma for 16 years. The executive director of the Islamic Center of Pittsburgh. The executive director of the Tony Blair Institute for Global Change. An award-winning freelance journalist who writes about Native Americans and indigenous rights.

This is just a sampling from the roster of 24 speakers and panelists contributing to “The First Amendment for the Twenty-First Century: Current Threats and Community Responses,” a regional conference co-hosted by The Pittsburgh Foundation and The Heinz Endowments, June 21-22.

The foundations’ two presidents cited the conference as a public response to alarming signs that First Amendment basic freedoms – of religion, expression, the press, public assembly and government petition – are being eroded, and that the country’s democratic institutions could be threatened.

“To be strong, our democratic system must be anchored by citizens who understand their rights and recognize that those rights also apply to others who do not share their views,” Maxwell King of The Pittsburgh Foundation and Grant Oliphant of The Endowments wrote in the preamble to the Conference program. “To endure, our democratic institutions must be validated by citizens who use their basic freedoms and have respect for others who do the same.”

Among the covered topics: how college students view basic freedoms; whether right-to-know laws enhance First Amendment powers; the role of artists in elevating free expression; how technology can advance or inhibit exercise of basic freedoms; and how communities can support press freedom in a period of unprecedented attacks against journalists and fact-based reporting.

In addition to sponsorship by the two foundations, the conference is being presented in affiliation with Media Impact Funders, a national member-supported network of philanthropies that seek to improve society through best-practice use of media and technology.

Jeanne Pearlman, The Pittsburgh Foundation’s senior vice president for Program and Policy says the conference is the launch pad for a year-long series of activities developed to generate civic dialogue on how people can respond affirmatively to threats to First Amendment freedoms.

The Foundation and The Endowments will be working with grantees and donors, as well as local and national collaborators, to design programs that assure that southwestern Pennsylvanians know about, and are prepared to assert, their first amendment rights.

“We expect to work with local artists to create works that celebrate and comment on the five freedoms,” says Pearlman. There are plans for new partnerships with local school districts that explore how the first amendment is taught to young people. We intend to work with faith communities, cultural organizations, libraries and community centers.

“We want to be in the places where people gather to engage in respectful civic dialogue,” says Pearlman. “We see this project as the best way for place-based philanthropy to bring people with diverse perspectives together to use first amendment freedoms to work for the common good.”

In addition to the community programming, The Pittsburgh Foundation will extend its awareness-building effort by co-hosting a second conference with Duquesne University on its campus Oct. 21-22. “A National Conference on the First Amendment: The Bedrock for American Freedoms,” is intended to provide legal, academic and journalistic validation of the First Amendment as a foundational value that all Americans share and support regardless of political or ideological views.

learn more ABOUT THE OCTOBER CONFERENCE

Advocating for the vulnerable

From Injustice to Community Building