Children socialize and snack while their parents take part in support groups at Anchorpoint Counseling Ministries, one of 97 nonprofits to benefit from the Critical Needs Alert fundraising event.

ON MAY 23, IN A BOLD PUSHBACK AGAINST THE threat of state and federal government cutbacks to support for essential human services, The Pittsburgh Foundation embarked on an ambitious test of community generosity: a 16-hour, online Critical Needs Alert—a fundraising juggernaut meant to generate significant contributions for nonprofits struggling to provide the most basic goods and services: food, shelter, transportation, child care and health care, including mental health services, for people desperately in need.

The result was remarkable for a regionwide, one-day giving event; the Critical Needs Alert, which replaced this year’s Day of Giving, yielded $1.27 million in contributions to 97 nonprofits.

Coincidentally, Critical Needs was on the same day that the federal government released a proposed budget that would make massive cuts in safety net programs. And it came just six weeks before the deadline for passing Pennsylvania’s new state budget, one in which essential services funding to counties is in jeopardy.

The Critical Needs Alert nonprofits were chosen because they depend on government funding to help the people who face myriad emergencies every day, says Kelly Uranker, director of the Foundation’s Center for Philanthropy and overseer of the Foundation’s online fundraising. 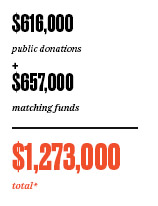 “We asked each organization to explain how its mission is connected to meeting the basic needs of those who are referred or show up on the doorstep needing help right away for a health issue, or to get housing, or to feed themselves and their children, or for transportation to get to school or work,” she says.

Critical Needs is also aligned with the Foundation’s 100 Percent Pittsburgh organizing principle, which focuses on the one-third of the region’s residents — the jobless and the working poor — who haven’t benefited from the recent economic boom.

Philanthropy can never replace government investment in human services. And yet, the political “sea change” in government policies toward the poor and vulnerable makes it incumbent upon people from all sectors of the community — including philanthropy — to reinforce this fragile safety net, says Foundation President and CEO Maxwell King.

“We believe Pittsburgh’s community foundation must lead now on the moral imperative. The Critical Needs event is key to jump-starting the legendary generosity that residents are known for in assisting the most vulnerable,” he says.

The May Critical Needs event wasn’t the first for the Foundation, although it was the most successful. In 2013, a similar event raised $618,000 for nonprofits addressing food insecurity. Critical Needs Alerts raised $900,000 in 2014 and $1 million in 2015 for housing insecurity, for a total of $3.1 million since the event began.

The previous years’ successes factored into the decision to withdraw this year’s annual Day of Giving, which involved a broader spectrum of nonprofits. That allowed “first responder” nonprofits to receive maximum funding under a new format designed to promote giving over a longer period.

In each of recent years’ Day of Giving events, online public donations under the wildly popular dollar-for-dollar match format declined once donors saw that the Foundation’s pool of money was drained — sometimes in as little as four hours.

This time, over 16 hours, nonprofits used their own websites and other social media platforms to direct donors to the Foundation’s online giving portal.

Afterward, payouts from the Foundation were prorated: If an organization raised 5 percent of the total amount collected by way of Critical Needs, that nonprofit would receive 5 percent of the match, or $30,000.

It was easy to see the difference throughout the day, as contributions flowed steadily. That night, even during a widely-viewed Pittsburgh Penguins Stanley Cup playoff game, the online giving continued, she says, spiking during com­mercials, straight through to midnight.

The Pittsburgh Foundation Among Those Honored by ACTION-Housing

The Pittsburgh Foundation’s 100 Percent Pittsburgh organizing principle is working to address the risk of poverty facing single women with children by funding nonprofits such as Jeremiah’s Place, the region's only emergency child care center.